You are here: Home1 / Poppy 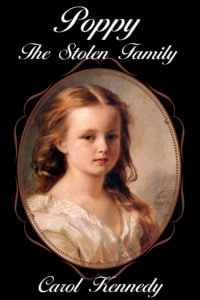 Falsely imprisoned as a child in Victorian England, Poppy is finally released as a young woman. But despite this cruel adversity, her loving spirit remains undaunted, and she eagerly begins to reconstruct her life. However, burdened with the dark secret of her imprisonment, she eventually shares it with Scotland Yard’s finest: Inspector Peter Palgrave — betrayals and intrigue abound.

Joan Johnson: “Carol Kennedy has a magic wand that waves away the mundane and worrisome times in which we live and puts us squarely in the world of the Victorian era. Her prodigious work, seven books already and another on the way, brings back the world of Dickens, The Bronte sisters, and even Flaubert with authentic language, settings and details of life in an era before the crust of technology covered society, a time when hardship and happiness were clearly defined as central to life without distractions. … I am grateful to writers who can spin a yarn that is full of warm-throated goodness that overcomes adversity. Kennedy is a prolific writer with a teeming imagination, a writer to be cherished for her gifts. I am grateful to have found this series of novels and hope there are many more to come.”